I am a master of conveying large amounts of information in small amounts of time. I have my job to thank for that.

“I want a car.” I’m holding Mark’s mustache, he is taking off his pants.

“So I can drive places. For my blog.”

He sets his watch on the shelf.

“Do you have someone who will buy one for you?”

He unbuttons his shirt, tosses it on the chair and takes another from the rack.

“There is one person, but I’d have to marry him.”

“Is he forty-five percent decent?”

“That won’t do. There must be someone else.”

“Maybe one other person.”

“Would you have to sleep with him?”

“That’s not an issue. I’d never get a word in edge-wise, though. Ever again.”

Mustache on. Wig on. Glasses on.

Here’s why I want a car. Maine. New Hampshire. Rhode Island. Virginia. West Virginia. Maryland. Delaware… all a car ride away. Nothing could stop me from collecting dating data.

Nothing could stop me from moving. Bouncing around. Seeing the world.

I would be free.

And, I could bring my dog.

Nicki and I are at a wine bar, eating fancy cheese.

“I can knock out dates in seven states like that.” I illustrate with a sort of snap. I can’t snap. But I can make it look like I’m snapping. It’s noisy in the bar, so it’s not like she would notice.

“Why don’t you just date someone with a car?”

“Why does everyone want me to date someone for real?”

“Because it doesn’t make sense that you want to date random people just to – do whatever you’re doing.”

“I might sleep with a twenty-four year old. I think he’s gay.”

Maybe I should study Nicki instead.

“I should get home to my dog.”

She sips her wine, slowly. She lifts an eyebrow, as it a single facial gesture can add weight to a moment.

A mysterious smirk teases the corner of her mouth, she tilts her head, just so.

She toys with her glass.

“What makes you think he’s gay?”

“First off, he flirts with all the girls at work.”

“He made out with me after the company Christmas party.”

“The one where you were pretending to be me?”

“Does he know you have a married boyfriend?”

If I had a car, I could just hop in and leave.

“Second – he’s a virgin. So it’d be a like a Christmas present.”

And I could take my dog with me everywhere. Maine. New Hampshire. Delaware. Kansas.

“Three – I’d offer him an opportunity to see clearly his next steps in his evolution as a man.”

“Tom walked in on him going down on his boss.”

But then I’d have to find parking.

“He flirts with all the girls, but he never asks any of them out.”

As much as I think there might be love out there for me, for everyone, this world is a mish-mashed haystack hovering between order and entropy. Looking for the right needle require patience, and courage, faith, and luck. Needles are easily broken and bent and crammed into shape with a little care and a lot of manipulation.

I’d love to experience that windswept romantic sort of love in my life once more with someone who might stick around.

But, it doesn’t take an intellectual giant to see that my eyes are the eyes of the universe. And as long as we keep talking, telling stories, sharing pictures, my eyes are your eyes, too. And your eyes are mine.

So, when I’m staying up late to catch a glimpse of the Aurora Borealis or drinking in the coastal beauty of Maine, you are, too. We’re all in this beautiful haystack of a mess together.

He sets his watch on the shelf.

“I want to see the Aurora Borealis.”

“Do you have someone who will take you there?”

He unbuttons his shirt, tosses it on the chair and takes another from the rack.

Mustache on. Wig, on. Glasses, on.

“I think I want to go this one alone.” 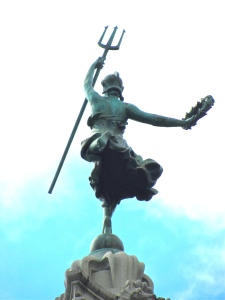