My trip to Boston was barely a week ago. The minutes collide, the moments break down, and the weekend becomes a barely cohesive mash-up of memories I’m still sorting through.

I remember a black-tie affair with a young singer and his flawless afro crooning Al Green in the corner. There was a wine-fueled dinner with my date’s friend and his wife. There was an evening sitting at a fire pit, fighting over two sides of the political coin, as if either of us understood what we were saying. And then there was a morning spent alone in a cold, cluttered house of a man who fancies himself rich, but stocks his cabinets with Hamburger Helper and cheap coffee, his walls with bad photographs of his beautiful children. A ride in a jeep to the beach on a cool, fall day and a passionate argument where a man who doesn’t know me told me who I am and what I need. A cheap lunch in a slow restaurant, an insight into a frightened child of a man struggling with outward successes and inward failures. And then a heavy sleep against the train window, the ancient tracks pounding below, all the way back to the city.

In my dream, I was in a hollow plane with a man who I knew was my husband. The plane was rickety and dirty and we didn’t pay much attention to the other people with us.

“To get to the higher act,” he told me, “jump out of the plane and wait for them to catch you. Sometimes it seems so long a fall that you might think they’ve forgotten you,” he said, “but they’ll always catch you.”

It didn’t sound all that nice to me.

I asked if I could stay behind, and he admitted that some people do. “But,” he said, “if you do, you’ll regret it.”

“I hate the sensation of falling,”

“The upper act is so beautiful, it will change your life forever.”

Only a few guests are at the black-tie even when we arrived. The carpet of the Westin mezzanine is stained, and the fluorescent lights flicker brightly. The silent auction includes an opened Flip Camera, a set of brushes and a blower dryer, and a hand-woven wall hanging scrunched on its hanger, black and brown, absorbing the light.

He hands me a glass of wine, but my stomach, cramped from emptiness, is beginning to ache. I carry the glass as we wander the room, looking for the people who need to see him there.

It’s business, going to these fundraisers. It’s about being seen. Even a charity event is not for the charity. It’s for the guests.

I thought of the heart-felt fundraisers I’ve been to in New York. People struggling to make their low-end, high-class aspirations come to fruition. And how each guest is a celebration who wants to help in whatever way they can.

The singer, backed by a trio, sings softly in the corner. I smile at him, but he doesn’t see.

I smile at everyone.

We are nothing, if not our stories.

I was walking and talking with my friend. We were at a dingy airport, and the airplanes were parked like buses, one after the other.

We wandered through the lot, looking for my plane.

I told my friend about the play my dream husband wanted me to experience, how the first act took place in that rickety shell of a plane. And, how, even though I was nervous about jumping out of the next plane to get to the following act, I knew I would do it.

Not liking the sensation of falling, was not enough of a reason not to.

She walked with me, listened to me, and nodded.

We stepped through an arch and into the most beautiful, old train station I’d ever seen.

I felt better after that.

Wine blurs your vision, and fine food with people who agree with each other, but not with you, makes for an interesting event, especially when one of them is begging her husband for a baby, but yearns to go back to work, another feels closer to his Porsche than his family, and the third wants you for dessert.

The waiter winks and wonders, perhaps catching a glimpse of the tattoo nestled on the inside of my forearm as my fist comes down on the table, my fork drops and my mouth opens in defense of the rest of the world, the thinking parts, with beating hearts, and charity, and soul. I sing about the indigenous people after my date’s friend wonders out loud if it’s better to protect them or invite them to participate in our damaged culture.

“These people are the stewards of the mind-bogglingly beautiful planet we live on,” I say. “They’re the only ones who keep our story. The rest of us, in ‘civilized society,'” I start, “we – I – do you even know your great-grandmother’s name? We’ve been ripped from our roots and told that’s a good thing.” Everyone else at the table has stopped eating. “Seventy percent of our pharmaceutical knowledge comes from the people in the rainforest. We need them. They’re the only ones who know.”

They switch the conversation to economics. And I find myself contributing once again.

And they listen politely until I make myself stop.

“I’m sorry,” I say graciously, picking up my fork, begging out of the discussion. “I talk too much about things I don’t understand. What do I know? I’m just a downwardly spiraling middle class punk who just lost her health insurance.”

The waiter fills my wine glass. If there is an uncomfortable silence, I can’t hear it above the din of the restaurant.

I like to travel light and he is frustrated that I don’t want any of the gifts he talks about giving me, including himself.

“You need a relationship,” he says. “You need someone to support you.”

I shrug. I don’t really feel like I need the type of support he’s talking about.

“You need someone by your side.”

“I try to love everyone and treat people well,” I say. “Maybe it’s a flawed strategy,” I admit.

He smirks and we drive for a bit in silence.

The sky is a perfect blue, the clouds arranged like a children’s painting. The wind hammers the Jeep, first cool, then tepid, then warmed by the sun.

“How about when you’re vomiting form chemo after your breast cancer surgery,” he finally counters, “wouldn’t it be nice to have someone there?”

I have no answer, so I smile and look out the window. Much later, that I realize he’s talking about himself. That he’s scared. And lonely. And doesn’t want to die alone.

I choose my words carefully when I find them. “I guess I’ll cross that bridge when I come to it.”

The date ends as the day comes to a close. He drops me at the train station, disappointed, I’m sure, at the unsatisfying outcome of the weekend.

He had said ‘no strings attached’ in his invitation.

I took him for his word.

I think that made him sad.

My friend and I find the plane and we both take our seats.

I’m nervous, but willing to jump and trust as the plane takes off.

We both know that we’re about to witness a moment of life-changing beauty.

But, in order to do so, we have to trust it with our lives.

Love is a funny word.

Over-used, under-valued, bigger than any of us, and the best thing ever.

Let’s scrub it clean, embrace it fully, and trust it with our lives. 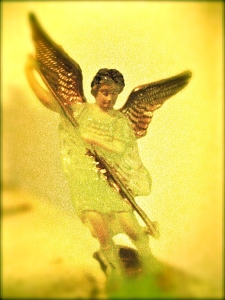